Do We Choose Our Parents by Isabella May

Do We Choose Our Parents?

Welcome to my blog again Isabella, it’s a pleasure to host you once more. I was honoured to have you when your debut novel “Oh What a Pavlova” was released and now your second book “The Cocktail bar” has recently been published. Tell us more about this fascinating concept, do we choose our parents?

Thanks so much, Cristina for featuring me on your blog today! We are going to be journeying to Glastonbury… courtesy of my new novel, The Cocktail Bar, and its main character, River Jackson (as well as the kooky Heather, who, among other curiosities, has a penchant for the ‘grounding properties of all things ginger and catnip’!).
I too grew up on Somerset’s leylines, but it was only in my late twenties that my spiritual self began to gingerly tiptoe out of her closet. And since having children myself – and reading a brilliant book co-written by Dr Wayne Dyer and Dee Garnes, called ‘Memories from Heaven’ – I have been quite fascinated with the idea that we might well select our parents before birth…
In this little snippet from the book, River has recently learned that his father could be any one of three men – may even be his former band manager. How very Mamma Mia! And possibly something that only a mother like his slightly unconventional one can get away with…

‘Heather sniffed and then smiled. “You know my theory on these things from the stories I’ve told you about my own upbringing.”

He knew what was coming next and bit his tongue.

“We choose our parents, River. We don’t always take the easiest path because where’s the spiritual lesson in that, how would our souls grow otherwise? But we do choose them.

“Yeah, I know.” He felt a smattering of guilt then at the tales Heather had passed on to him about the way her father – his grandfather, who he’d fortunately never met – had beaten her as a child, his grandmother besides. When he looked at it like that, he supposed he could have chosen more extreme parents. Although, try as he might, the idea of him floating about on a cloud looking at a giant TV screen with potential mums and dads lined up on it – as Heather had so often tried to put the idea into context when he was a young child and he’d frequently questioned her as to the whereabouts of his daddy – seemed ludicrous. Surely, if he had spotted Lennie – a younger, trimmer version, or not, he’d still have wanted to avoid the creep at all costs.

“I think we could both do with a nice pot of catnip. What do you say?”

Excerpt from The Cocktail Bar, by Isabella May 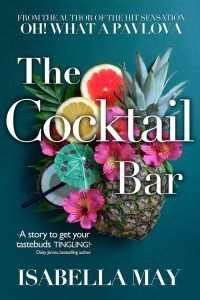 And if this has whet your appetite to find out more about the unconventional tipples that appear in River’s Somerset-based bar, here’s the blurb for the book:

Rock star, River Jackson, is back in his hometown of Glastonbury to open a cocktail bar… and the locals aren’t impressed.

Seductive Georgina is proving too hot to handle; band mate, Angelic Alice, is messing with his heart and his head; his mum is a hippie-dippy liability; his school friends have resorted to violence – oh, and his band manager, Lennie, AND the media are on his trail.

But River is armed with a magical Mexican elixir which will change the lives of the Three Chosen Ones. Once the Mexican wave of joy takes a hold of the town, he’s glad he didn’t lose his proverbial bottle.

Pity he hasn’t taken better care of the real one… 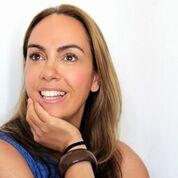 Isabella May lives in (mostly) sunny Andalucia, Spain with her husband, daughter and son, creatively inspired by the sea and the mountains. When she isn’t having her cake and eating it, sampling a new cocktail on the beach, or ferrying her children to and from after school activities, she can usually be found writing.

As a co-founder and a former contributing writer for the popular online women’s magazine, The Glass House Girls – www.theglasshousegirls.com – she has also been lucky enough to subject the digital world to her other favourite pastimes, travel, the Law of Attraction, and Prince (The Purple One).

She has recently become a Book Fairy, and is having lots of fun with her imaginative ‘drops’!

The Cocktail Bar is her second novel with Crooked Cat Books, following on from the hit sensation, Oh! What a Pavlova, published in 2017. Her third novel, Costa del Churros will be published in September 2018.

If you want to get fit, just start walking… Q & A with the Talented Gemma Snow

Q & A with the Talented Gemma Snow