So what do you say when you’re a huge Triathlon fan and an old mate, who just happens to be four-time World Champion Chris McCormack (aka Macca), phones you up out of the blue to ask if you want to work as the Spanish interpreter at Super League Triathlon Mallorca?

Er…hello! There is no other coherent response than, “Yes, please!”

And the whirlwind adventure began. 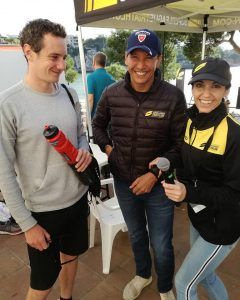 Flights were booked, bags packed, though I had no idea what exactly was needed of me. But I was too excited to worry. I was going to be hanging out with the best triathletes in the world—Vincent Luis, the Brownlee brothers, Katie Zaferes, Taylor Spivey to name but few.

But on arrival I certainly didn’t expect to be presented as the official Spanish race commentator. What? You know commentating requires a skill, right? A certain personality, a special flare to keep the crowds entertained. A high degree of self-confidence to talk non-stop (often about a whole load of rubbish) but make it sound coherent, intellectual and interesting.

Certainly not a skill I possess. I can quite comfortably write a 90-thousand-word novel, but get all tongue-tied when speaking in public. And now I was going to have to speak to a massive crowd about a race which gets broadcasted to over 850 million viewers.

My heart beat shot up, beads of sweat started to form, my legs went weak, and I hadn’t yet been handed the microphone… 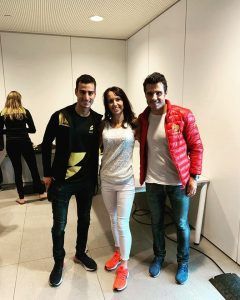 I really wasn’t sure it was something I could do or accomplish without making a complete fool of myself and ultimately let the team down, a team who believed in me much more than I did myself.

Funnily enough, race day came along and I wasn’t nervous. I put it down to being in a dream-like state. Surely there was nothing to worry about, because the whole thing was a figment of my wild imagination, and at any point I would wake up. Wouldn’t I?

But I didn’t wake up, and before I knew it, I was called over the loudspeakers—so everyone knew my name and there was no escaping—to do a live interview with no other than Javier Gomez Noya, five-time World Triathlon Champion. This was not the time to get star-struck. I had millions of eyes on me. I was desperate to ask him for his autograph, but it wouldn’t have been the most professional approach.

And I have to say, Javier Gomez Noya, despite being a huge triathlon super-star, is an incredibly down-to-earth, nice guy. I found myself chatting to him as if I’d known him for years. 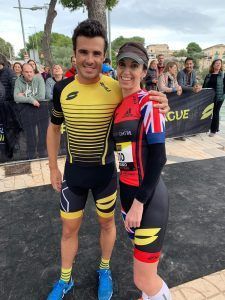 Interview done. Everything felt surreal. And I was having more fun than I’d had in years!

But there was no time to relax. The starter’s gun went off and the real action began. I’d watched live coverage of the Super League Triathlon series before and knew how impressive it is. These fast, technical and tactical courses keep the spectators on edge. But to watch from inside the perimeter of the race-course was just mind-blowing. The hiss of the bike wheels as they sped past, kicking up the rain drops that had settled early morning; the shouts of the crowds, cheering on their favourite athlete; the emotion, determination and stamina of the leaders visible on their faces; the courage, tenacity and willpower of the athletes towards the back of the field in their own personal battle to remain within the 90-second cut-off margin—all these made the perfect cocktail of ongoing entertainment and excitement throughout.

Of course, by the end of the first race day I was completely hoarse, having taken this commentating lark in full swing. I was thankful that, as I was commentating in Spanish, statistically, of the 850 million home viewers, half wouldn’t understand a word of what I was saying; the other half just didn’t speak or understand Spanish anyway. 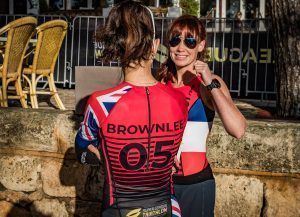 Day two was even more emotional, if that’s possible. A close race between the leaders of both the men’s and women’s event. The short-chute rule played a decisive tactical strategy and provided ultimate emotion for the spectators. 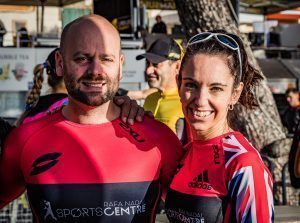 Personally, I was shattered, and I hadn’t done any racing (actually, that’s not correct; I did the corporate mixed relay race before the professionals took the stage, I know! Crazy, certainly not my idea! It just highlighted how fit and fast the professionals are, or perhaps how slow and clumsy we are). At the end of the day, it was with personal satisfaction that I completed the relay race without bringing up breakfast, and I didn’t say anything offensive over the loudspeaker whilst commentating.

However, just as I thought I’d overcome my reticence to talk, Rafael Nadal walked past me and I was thrown into a state of bashfulness, awkwardness and gawkiness. It was a real teen-fan moment, making me feel youthful and infantile—for all the wrong reasons. Thankfully I was able to stutter out a request for his autograph for my kids. (An excuse, of course; the autograph is for me!) 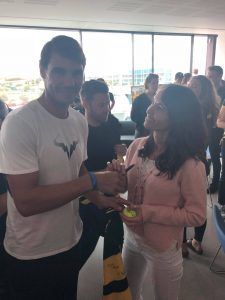 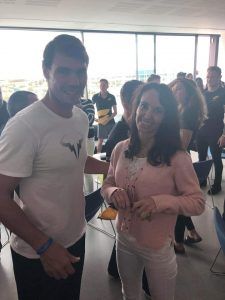 Super League Triathlon Mallorca was an amazing experience. I met some incredible athletes, a very professional back-stage team, hung out with some old friends and met some lovely new ones.

Don’t believe you can’t do something until you try it… you may surprise yourself and have a whole load of fun in the process. 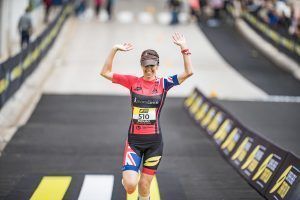 Road to Malaga 2018. World Masters Athletics Championships…My journey, not my destination… Seven tips to break the myth that all expats on the Costa del Sol are uncultured (aka lager louts).