Cristina ABOUT ME, INTERVIEWS 0

Some of you are following my journey to the World Master Athletics Championships (Malaga, September 2018) 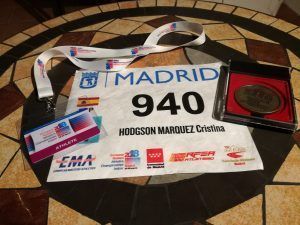 For those who have just stumbled across this now, basically after being out of competitive sport for many years I’ve challenged myself to try to get back in shape for the World Master Athletics Championships. I’m still trying to figure out why I have this urge to compete as a veteran. I’ve done all this in my youth, you would have thought that I’d have moved on to more sophisticated hobbies with age, like wine tasting clubs or just wine tasting. I don’t think I have much I can prove at my age. Surely there are better things to do with my time then wake up at the crack of dawn at the weekends to go running before my kids wake up. Like have a lie in or breakfast in bed to name but two.

Whilst I mentally try to figure it all out, I physically go about getting my training in and over the last few weeks it seems that slowly but surely I’m waking up those sleeping running muscles. The slow twitch ones, because let’s be frank, I’ve never had fast twitch muscle fibres. My heart and lungs starts to respond too. Thankfully my mind is still in a daze with all of this, though it’s only a question of time before it reacts and starts sending warning signals to stop this mad behaviour, so until that occurs I need to make the most of it and continue training. 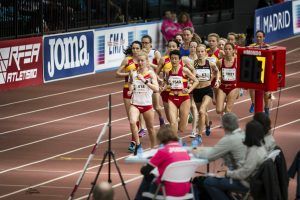 So the Europeans come around and I get to go. I decide the 1500m is the best event for my current fitness level. The race was yesterday Friday 23rd at 13.05 pm in Madrid. I had a four hour drive to get from where I live to Madrid. I calculated the travelling time accordingly. Not taking into account that Madrid has this really confusing underground tunnelling network. So on arriving at Spain’s capital city I got completely lost in this underground spaghetti road system and of course the GPS system, like most things ten feet under, didn’t work and every time I popped, like a mole, out of these odd tunnels I was further and further away from the track.

I could feel myself getting worked up, and I hadn’t even got to the start line yet. 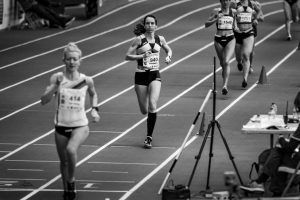 Finally, after much stress I got to the track and sprinted to the athlete’s corner to sign in. And, as if in slow motion where words come out really warped, I heard one official inform me I was too late. I don’t know how I didn’t faint from the realisation I wasn’t going to be allowed to run. I’m also still unaware how I was able to keep my cool and sweetly smile back keeping the hysteria from my voice as I replied “You’re so funny, but of course I’m running!” I think I even snorted out with laughter at the idea that I wouldn’t be allowed to run. Disqualified before even getting to the start line. (That would be a first and I hadn’t even taken a doping test to confirm my four cups of coffee). It sounded like some terrible nightmare. But sure enough, I was five minutes late and rules were rules.
Thankfully one of my team members, who was aware of the mess I’d got myself into, forewarned about my situation. Half an hour before the actual race, it was officially confirmed that I could compete. By that point I had such a stinking headache (and heartache) that I had no idea how I was going to run. In a bit of a daze I got into my racing kit and started warming-up. 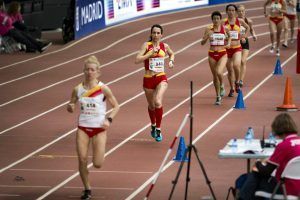 I was so nervous I started talking nonsense to all the other competitors. Ironically one member of the GB team was actually Spanish, and I suggested we should swap kit, after all “Hodgson” isn’t quite your typical Spanish surname and “Ramos,” well, I didn’t even need a pro- Brexit to point out it wasn’t quite your most common UK surname.

Before I knew it, we were led out through this tunnel to the centre of the brightly lit stadium. It doesn’t matter how many times I’ve raced, the pre-race nerves are still there, this time I had a headache to add to it all, but I was just so relieved that I had been allowed to run that everything else paled in comparison.

I came 2º in my heat and 12º overall. Not my best performance and a far cry from my PB but it was incredible to run with such talented athletes again. So World Championships, here we come. I’ve got six months to make sure I turn up on time… 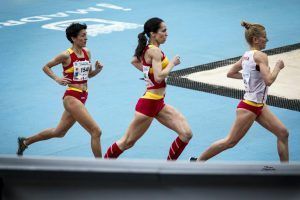 And I say I don’t know why I do this, but then I see the look of admiration in my kids’ eyes and I know exactly why… 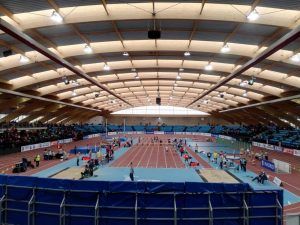 Q & A with the Talented Gemma Snow How to cope with Seven Months of Rain in Southern Spain…(Beginners Survival Guide).

ABOUT ME, BLOG, LIFESTYLE

ABOUT ME, BLOG, LIFESTYLE