Q & A with Thomas Hocknell.

Please welcome author Tom Hocknell to my blog today. Hello Tom, please make yourself at home. You’ll find some tea and scones to your right, but if you’re feeling a bit more adventurous and it’s not too early, to your left, the unlocked drinks cabinet. ; )

Tom, your debut novel THE LIFE ASSISTANCE AGENCY which was released at the end of last year, has been selected for the WHSmith’s fresh talent. Congratulations!

Could you summarise your latest work in just a few words.

Thanks very much! The intention was to imagine PG Wodehouse writing Da Vinci Code. No pressure there then – he’s only one of the greatest writers in English literature. That’s Wodehouse by the way, not Dan Brown. Someone has compared my novel to the Blue Brothers searching for the Holy Grail, which I’m almost annoyed I didn’t come up with as my elevator pitch.

Tell us a little bit more about what the WHSmith’s fresh talent is all about, what were you doing when you heard the great news?

What a great question. Well, the WHSmith’s Fresh Talent clearly has a very discerning eye! It’s a selection of 12 new writers who show promising talent. I can’t quite believe I’m in it. I feel too old to be fresh. But what fantastic company to be in. It’s really helped with sales and given my novel readers that it might otherwise have failed to meet.

I can’t recall where I was when I heard about being included, but I can remember where I was when I discovered I was to finally be published. I was at the cinema with a 4 year old about to watch Hotel Transylvania 2 – needless to say the more subtle inferences of the film were probably lost on me as I was somersaulting in the air – at least internally. I was in a cinema after all.

I wish I could remember! I wanted to write the sort of novel I like to read but often couldn’t find. I’ve always liked road trip novels so that was easy, they’re also easier to write, as there’s a natural sense of propulsion to help with the plot. I’ve always liked the idea of shady organisations guarding ancient knowledge, but then who doesn’t. I really wanted to ensure that although the Life Assistance Agency has a fantasy element, it’s also based in reality so you’re kind of pulled into that world by the time things go a little off the map. There’s also a soundtrack, so music inspired things along the way.

So tell me, are you a plotter or a pantser?

I wish I were a plotter, with all their annoying flow charts, plot lines and knowing exactly what’s going to happen without the panic of having painted characters into such dead ends that only hereto-undeclared magical powers can assist them.

Bloody hell. Plotting would make things so much easier. I make things up as I go along. It’s simply fortune that they’re driving a right-hand drive sided car when a ladder goes through the left passenger side!

Actually, I do have a better idea of plot with the new book. I have a vague idea of where it ends, even if I’m not clear yet what happens. Or why.

They say that some of the best authors are extremely shy? Is this true for you?

I used to be, which is perhaps why I read comics (Whizzer & Chips, Commando and 200AD) and books so much as a child, but I’m not shy these days. I didn’t talk for the first 4 years of my life. I guess there’s not much to say before then, but I’ve been compensating ever since. In fact I rather enjoy the attention and radio interviews! I’m not sure I’d be much good on morning television though. I struggle to find much will to live before 10am. 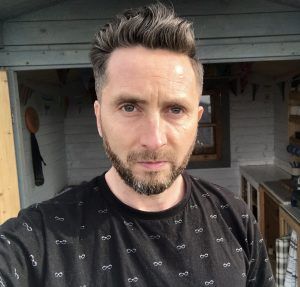 You’re also an active blogger, but what do you get up to when you’re not typing away?

I tend to buy records, go to the pub and do hot yoga – although probably not in that exact order. I watch US box sets like everyone else, but it takes me ages. And I LOVED Ripper Street. I’m happiest at my beach hut, so long as it doesn’t need painting. I also work as a social worker, which takes up some time, and I’m also bringing up children and studying.

I’m half way through the sequel to the Life Assistance Agency, due to high demand, which is basically my Mum. Actually, that’s not true. I finished the first book, only to realise it was the perfect cue for a follow up, which is a bit annoying. I thought I might just publish one famous book like Harper Lee or JD Salinger, and then disappear – to be subsequently forever mysterious and tracked down by particularly tenuous journalists every 10 years or so . I’d also like to publish my Idle Blogs of an Idle Fellow, very much as a companion piece to Jerome K. Jerome’s Idle Thoughts of an Idle Fellow from 1886. Despite his recent slacking off in his writing he’s been a huge influence, along with Douglas Adams and Geoff Dyer.

Thanks again for popping in. I look forward to reading your up-coming work. (Let me know if you need me to call you a taxi for the ride home).

The Amazon buy link for The Life Assistance Agency is:  myBook.to/lifeassistance 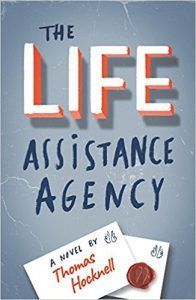